1 Corinthians 14:3 NIV- But the one who prophesies speaks to people for their strengthening, encouraging and comfort.

May the grace of the Lord Jesus Christ, the love of God, and the fellowship of the Holy Spirit be with you all.  2 Cor. 13:14 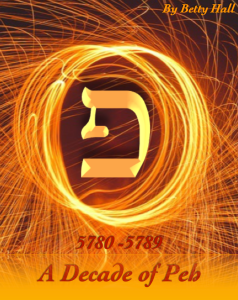 Be blessed, encouraged and strengthened in your spirit, soul and body.

Ephesians 1:3  Praise be to the God and Father of our Lord Jesus Christ, who has blessed us in the heavenly realms with every spiritual blessing in Christ.

1 Corinthians 14:3 But the one who prophesies speaks to people for their strengthening, encouraging and comfort.

Check Out Our Sister Site:: Living Beyond the Dalet

An Encouraging Word for 5781

The Lord has been revealing to me His strategic plan which has been rolling out and will continue to roll out in the coming years…The message of Ezekiel 37 is coming for the United States, but we aren’t there yet. The prophets need to continue to prophesy it. The U.S. will get there. It is coming. However, there is a process, a roll out that is going to restore her to her greatness once again.

A key and a promise

Ten years ago the Lord gave me a prophetic word concealed in a riddle. It was more like Churchill’s famous quote made in a radio broadcast in October 1939:

“It is a riddle, wrapped in a mystery, inside an enigma; but perhaps there is a key.”

Recently the Lord handed me a key to unlock the riddle and gain understanding. Then, this morning He gave me a prophetic word based on that understanding. The Lord has shown me a remnant company of people have been in a ten year season of being sent into exile. They have been torn down and diminished. This company of people have been tested and tried. It has been like an extended version of the the word Jesus gave to Peter concerning being sifted as wheat. (Lk 22:31)

The prophetic word I received this morning is concerning this company of people. It is a promise of restoration.

The prophetic word is a promise of restoration

The opening of Thy words giveth light; It giveth understanding unto the simple. Psalm 119:130 JPS Tanakh 1917

Then Jesus opened their minds so they could understand the Scriptures. Luke 24:45 EXB

Unless something is unlocked we have no understanding. It remains an unsolved mystery, an indecipherable enigma. Once we have the key the riddle is forever unlocked. Such was the case with the word I received ten years ago concerning 10|10. It was a mystery to me. Yet the Lord kept bringing it back to me as a word.

In recent years many prophetically focused individuals have had numbers highlighted to them by the Spirit and have tried to decode their meaning. I thought I knew what 10|10 referred to when the Lord first highlighted it to me. Oftentimes, the Lord will give us insight into something and we think we have the whole picture, only later to find out that we had insight but lacked understanding. This happened to the prophet Daniel. Gabriel came to bring him the ability to succeed at understanding. (see Dan. 9:22 NKJV). Sometimes, like Daniel, we have a piece to the puzzle but need further understanding in order to be able to decipher it.

Ten years ago, when the Lord first gave me the number 10|10 He said to me that it was a date on the calendar. That year was 2009 and 10/10 2019 turned out to be Shemini Atzeret, Tishri 22 on the Hebrew calendar. It is the day after the final day of the Feast of Tabernacles. So, yeah, the day came and went without much ado and I was left to ponder. I pondered until I could ponder no longer. I gave up on trying to figure it out and decided that if it was actually something from the Lord He would make it known in His time.

About three weeks ago I was digging through the significance of the Hebrew month of Tevet for a Rosh Kodesh teaching. During my digging, the Holy Spirit revealed a key. Then the Lord proceeded to apply the key to the mystery of 10|10. The Lord blessed me further with a prophetic word for a remnant company of people that comes out of this insight revealed by the Spirit. He instructed me to release this word today.

I received multiple keys in a download from Holy Spirit but I’m going to limit this post to the specific prophetic word the Lord gave me for today.

Here’s a bit of background that puts the prophetic word I received in the context in which I received it.

This date, Tevet 10 on the Hebrew calendar, is observed as a day of fasting. On the 10th day of the tenth month, the month of Tevet, 3336 (425 BC), the armies of the Babylon began to lay siege against Jerusalem. Tevet 10 is viewed as the beginning of the chain of events which climaxed thirty months later on the 9th of Av (the fifth month), with the destruction of the Temple, followed by the exile to Babylon.  The Jews see this as something from which they have never fully recovered. This is due to the fact that when the Second Temple was later built, it never returned to its full glory, in that it never housed the Ark of the Covenant.

There is a promise given through the prophet Zechariah that days connected with the sorrowful fasts commemorating the Babylonian siege and ultimate exile of the people of Judah, God will cause to become times relating to joy and gladness.

Zechariah 8:18-19 BSB Then the word of the LORD of Hosts came to me, saying, “This is what the LORD of Hosts says: The fasts of the fourth, the fifth, the seventh, and the tenth months will become times of joy and gladness, cheerful feasts for the house of Judah. Therefore you are to love both truth and peace.”

Here’s the word I received this morning:

“There is a company of people who have been in exile for the past ten years. Today is the beginning of this season being reversed. Today,” says the Lord of hosts, “is the day that I am turning the tables on your season of sorrow and loss. Today, I am turning your sorrow into joy. I am replacing your captivity with freedom and gladness. To those who have been in my fiery furnace of affliction these past ten years, know that I, the Lord, have faithfully brought you through your time of testing. The season in which you have marked the days off according to your loss, is behind you. Beginning now, you will be marking the days off by the days associated with joy of gladness, for I am restoring you and bringing you back. This is the beginning of a whole new rollout.” says your God. “This year, Ten, Ten will mark the beginning of a chain reaction which will culminate with your full restoration!”

Jeremiah 31:28 BSB Just as I watched over them to uproot and tear down, to demolish, destroy, and bring disaster, so I will watch over them to build and to plant,” declares the LORD.

Hi, I’m Betty, the voice and author of Thru the Dalet. I pray that the eyes of your heart be enlightened, so that you will know what is the hope of Christ’s calling, what are the riches of the glory of His inheritance in the saints, and what is the surpassing greatness of His power toward us who believe. (Eph 1:18-19) It is my desire that these prophetic words be a blessing to edify, uplift and encourage the saints of God, the ekklesia, the assembly of called out ones.

Betty Hall - Living Thru & Beyond

I have a passionate sons of Issachar heart (desire to know the times and seasons) birthed out of intimate love and communion with Messiah Jesus (Yeshua). I have a strong desire to see Christ's Eternal Kingdom manifest in the hearts and lives of Christ's Ekklesia  (the living tabernacle of God) in the earth. It is with focused passion that I share Holy Spirit imparted insight received through intimate communion in the secret place. Since we (the saints made perfect through the sacrifice of Christ) are the Temple of the Living God, (2 Cor. 6:16) have focus on revelation connected with the Tabernacle, the Feasts of the Lord and Rosh Kodesh. According to Ezekiel's vision there are trees bearing fruit for food and leaves for healing grow along the banks of the river of God's Mighty Spirit which comes out from the Sanctuary of the Temple of God (Ez. 47). It is my prayer that you find rest for your soul, healing and restoration as you are touched by the river of God. May God bless you with His salvation, favor and grace, In Jesus name. View all posts by Betty Hall - Living Thru & Beyond

This site uses Akismet to reduce spam. Learn how your comment data is processed.